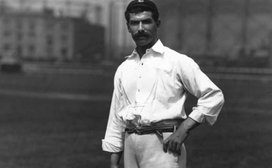 Tom Richardson is perhaps the greatest of the many cricketers Mitcham has provided to Surrey and England.

Born in Byfleet in 1870, by 1881 the family was living on Commonside East, Mitcham. He was soon playing cricket on the Green. Tom's older brother, Bill, recalled in a local paper in 1942,

"All we Richardsons learned our cricket on Mitcham Green and we began young. Tom was a genius at the game from the start. He was soon spotted by Tom Harvey and other big fry and yanked off to play with teams as old again as himself and with years more experience."

Playing for Mitcham in 1891 he took 102 wickets at an average of 7. He turned professional for Surrey the following year, taking 12 for 100 in his first game against Essex. A year later he played for England, and took 10 Australian wickets in the match, for 156 runs.

Over the 4 seasons 1894-7 Tom took 1005 first class wickets in England and 69 in Australia. He was renowned for sheer speed, with break-back, and a large number of his wickets were bowled. In Australia in 1894-5 England won the series 3-2 and it was Richardson's bowling in the final Test which achieved this.

Aside from his bowling, he had a reputation for fair play and kindness. Many runs were scored off him by uncontrolled sticks to leg. There is a story that his captain once said to him,

Tom, don't you think it would be as well if you had a man on the leg side deep to stop those runs?

To which he replied,

No, sir, if they play well enough to touch them, let them have the runs.

Tom bowled long spells, and, overbowled, by 1898 was in decline. He continued taking wickets through to 1903 but was not the force he had been.

Preparing for life after cricket Tom had taken over the Cricketers Inn, Kingston in 1902. He became licensee of the Wine Vaults in Bath in 1905, and played a final game for Somerset against the Australians. Returning to Richmond, he took over the Princes Head pub from 1907.

Tom died of a heart attack in 1912, on a walking holiday in France. His family could not afford to bring his body home and the Sporting Life opened a fund to support this. There was a huge response and his coffin was brought back to Victoria Station and his funeral in Richmond.

the best fast bowler of my time ... his action was so perfect (Herbert Strudwick
perhaps ,. the greatest of all fast bowlers (Wisden)
The greatest cricketer who ever took to fast bowling (C J Cardus)